Skip to content
Have you ever been on psychedelics and noticed how everything through your eyes gradually becomes fluid as it loses its original form? Me neither. But this is how I’ve imagined it to be.

In my attempt to create a typeface in my Advanced Typography module, I found myself exploring the  psychedelic phenomenon that first arose in the late 50s and 60s as a result of US military research. The experience of the phenomenon would induce hallucinations and inspire the counter culture movement. The consumption of psychotropic drugs would induce fascinating psychedelic visual imagery in the late 60s and the better part of the 70s. This type of imagery would come to identify and era.

The final project in the Advanced Typography module, was open ended in nature and allowed students to pick a challenge that suited their interests. I chose to explore the psychedelic phenomenon and use it as inspiration for my final project.

In this project, my desire was to visualise my take on the common psychedelic experience, which was focused on visual distortion. While designing the typeface, I was heavily inspired by the HBO television series, ‘Euphoria’. In this show, the main character Rue, experiments with hallucinogens as she struggles to cope with her drug addiction. Cinematographer Marcell Rév, translated the transcendent psychedelic experience into beautiful subtle visuals in this show which had become such an eye-opener for me.

After researching more on the psychedelic experience and knowing how I would visualise it, I began translating and refining the ideas into sketches and drafts. Once I was satisfied with the structure of the font, I vectorised it in Adobe Illustrator. From there, it allowed me to further refine and tweak the anatomy of each character, making sure every letter stayed consistent yet eccentric.

Once I was done refining everything and was satisfied with each letter, I turned it into a usable font using a free software called Font Forge. I followed this incredibly elaborate tutorial by Mary Winkler.  You may also refer to this quick video tutorial  to see my process of transferring my font from Adobe Illustrator to Font Forge.

Step 1: Open Asset Export on your Illustrator (Window > Asset export) and drag each character/ glyph of your typeface individually into the asset export window.

Step 2: Select everything you just dragged in the window (Ctrl + A) and export as SVG.
Note: It’s better to export into a specific folder and rename each file accordingly to keep each SVG file organised and make the next steps easier for you.

Step 4: Double-click on the box of a character you would like to import and navigate to ‘File’ on the top left corner of the window to Import an SVG file. 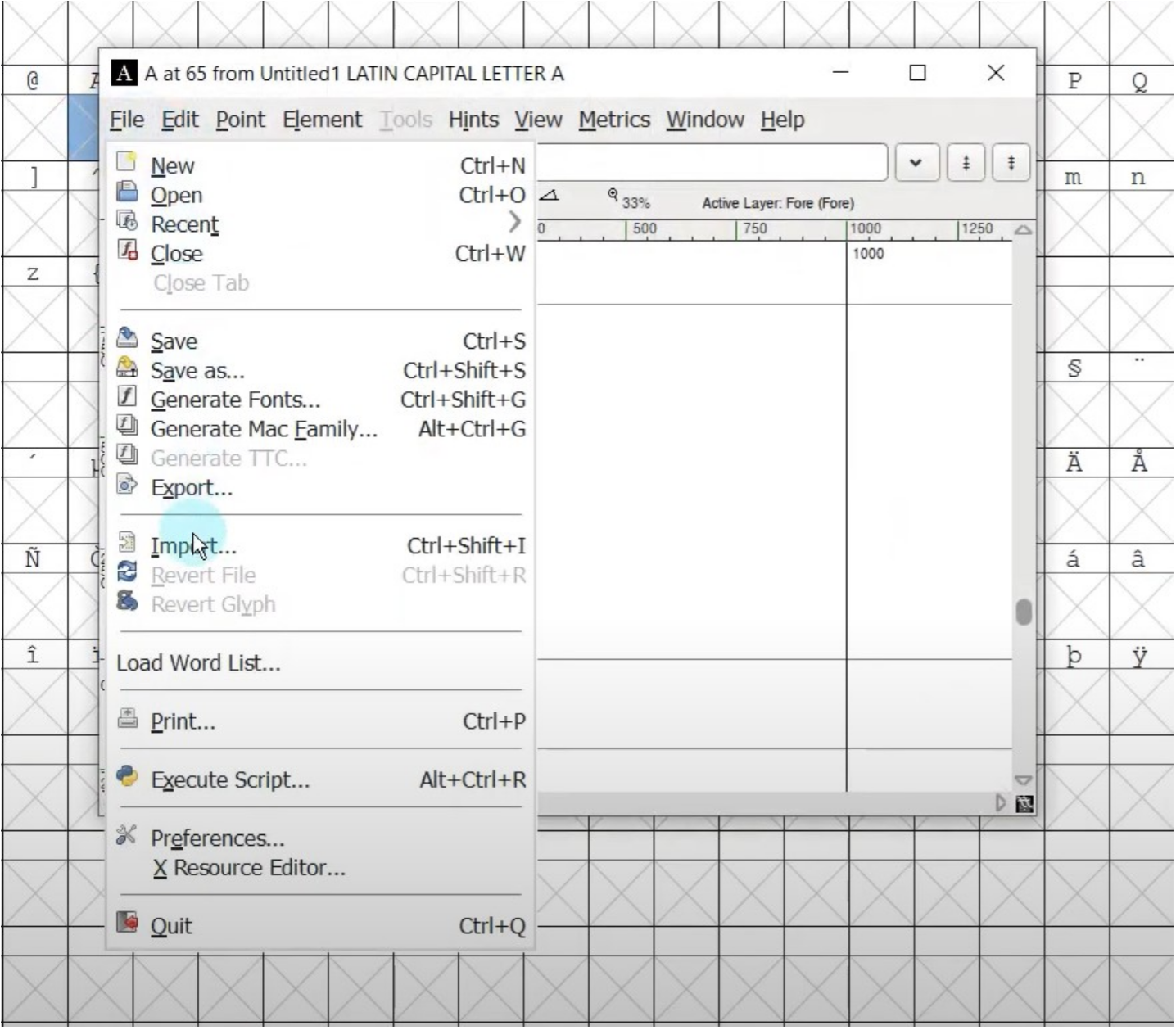 Step 5: Locate the folder you exported your SVG files from Illustrator, then import the corresponding file of your character/ glyph. 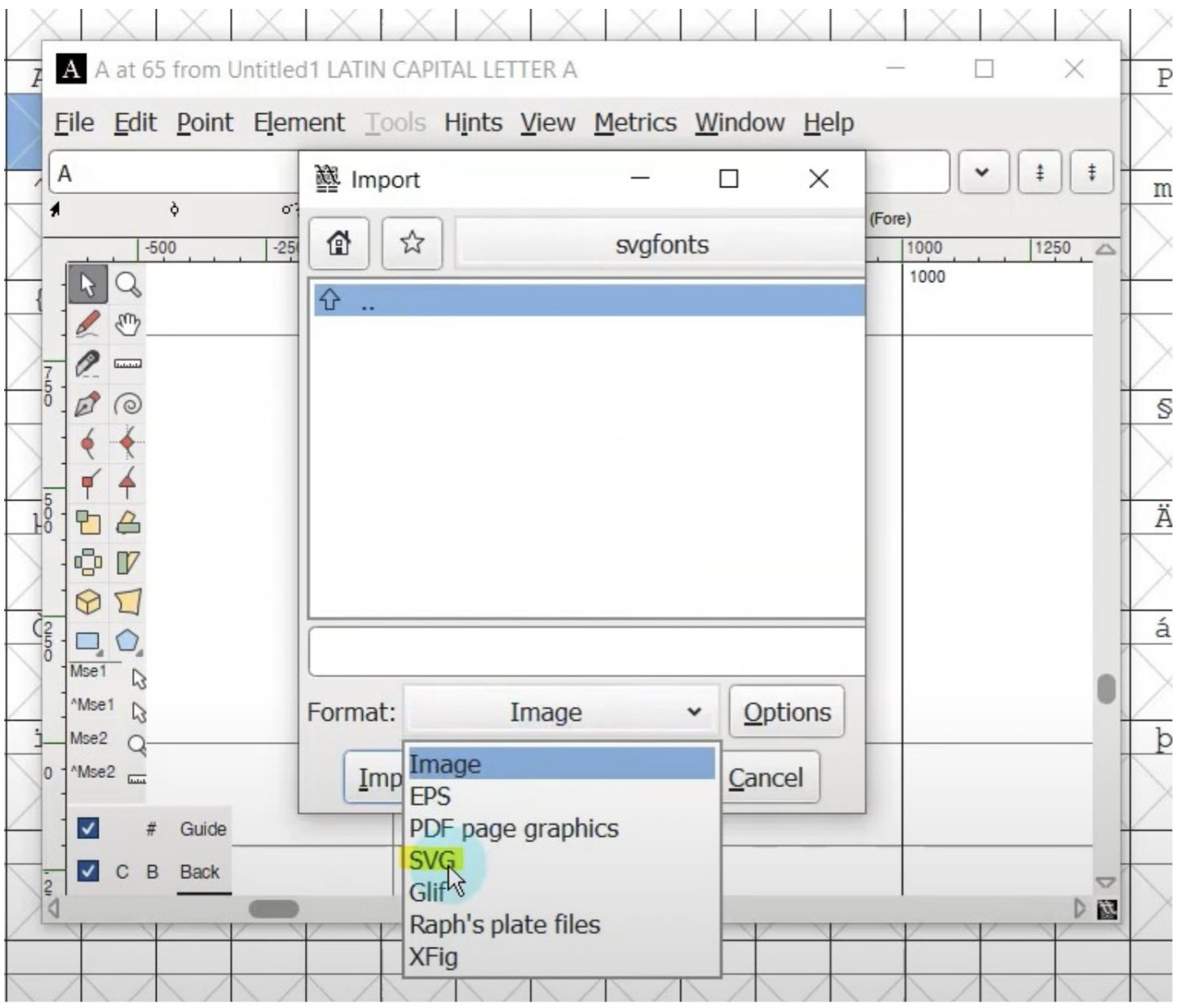 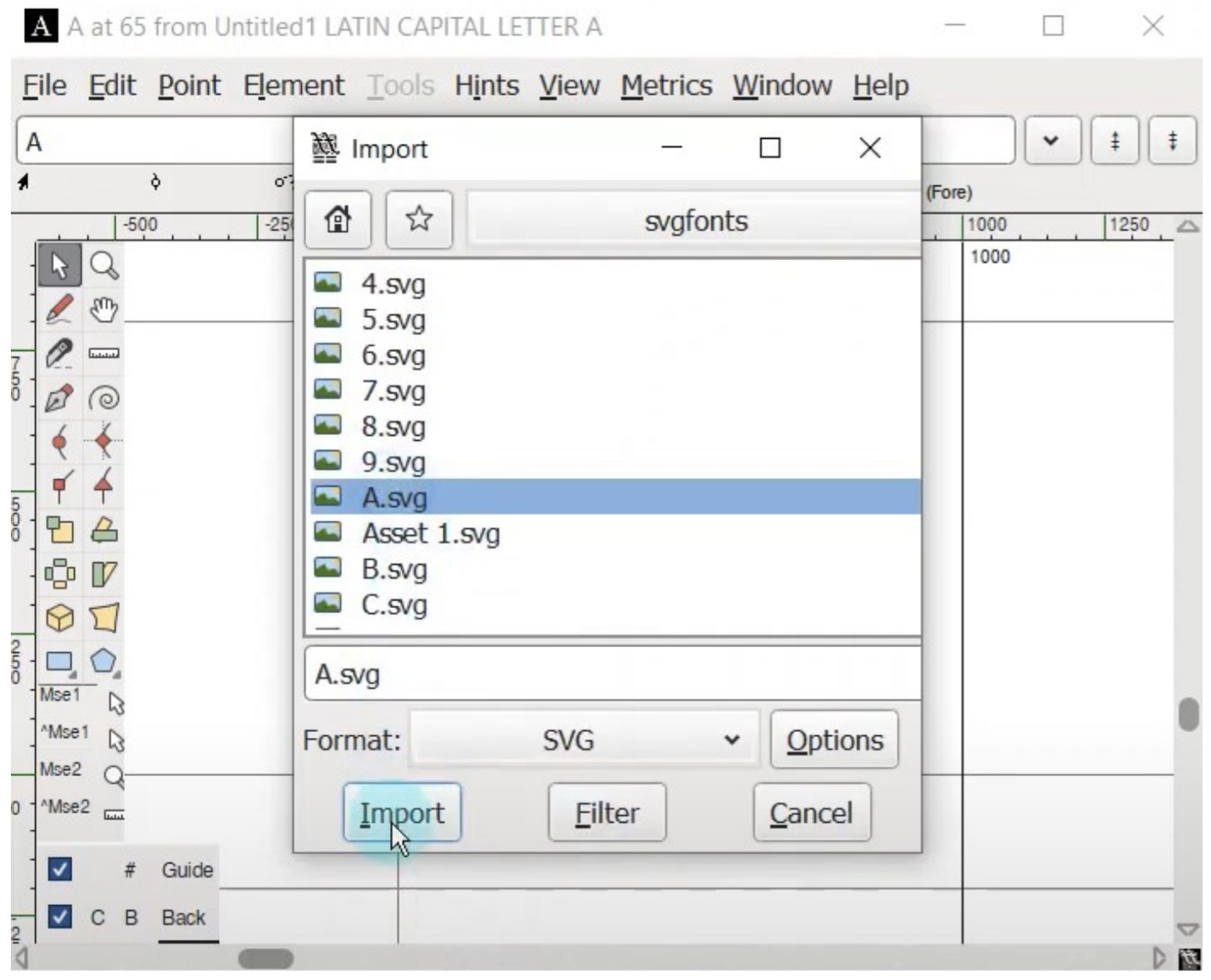 Step 6: From here, you can further edit your character as well set the baseline, cap height, and descender line boundaries using the guidelines. 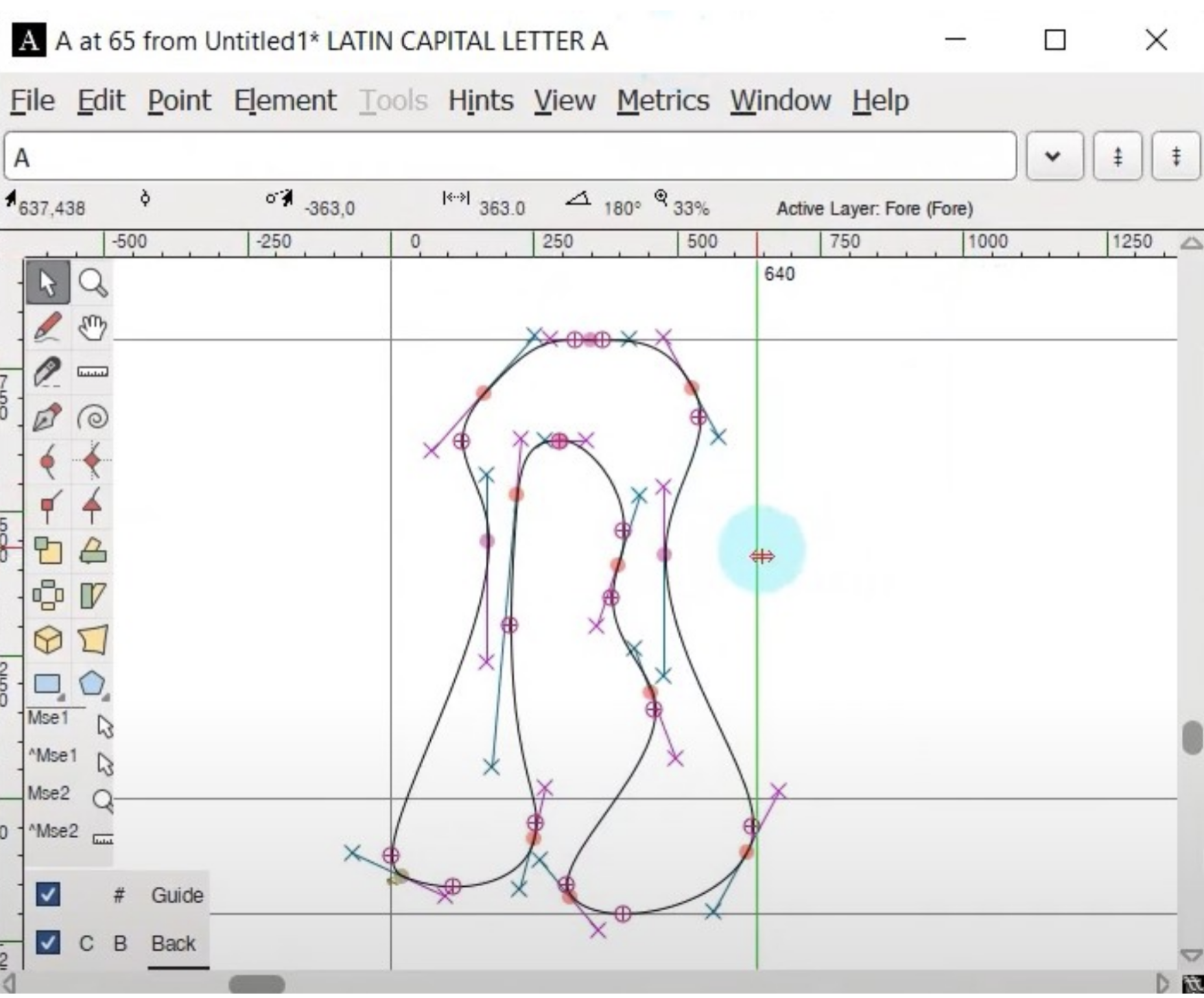 Now back to my hallucinogenic and psychedelic inspired typeface, which I appropriately named Psych. The complete typeface would consist of uppercase letters, numerals and four punctuations. While exporting the font to Font Forge, I would ensure to place the uppercase letter forms in the lowercase unicode cells in so that irrespective of whether your caps-lock is on or off, the font will appear in uppercase. 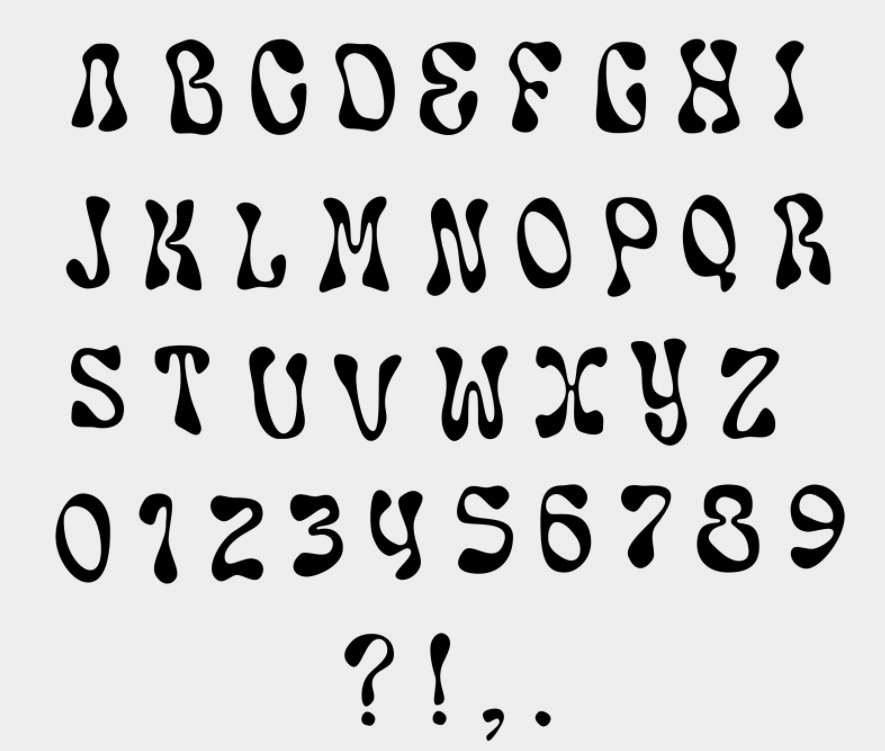 The typeface Psysch is designed by © Rhyanne C. Lowe, 2021. You may download the typeface Psych here, or test it out by typing in the font sampler below.